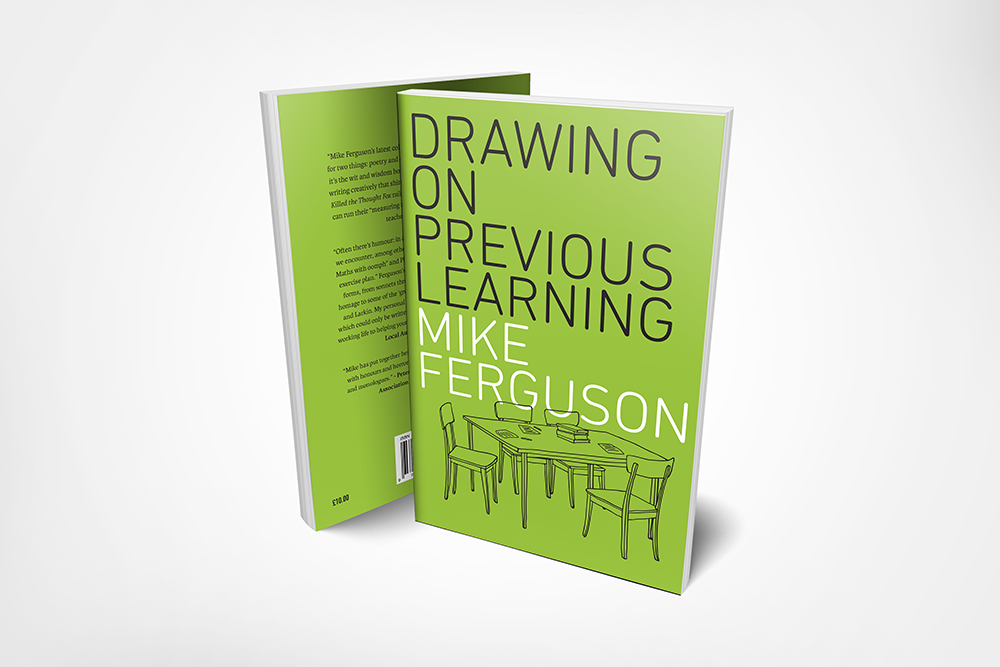 Drawing On Previous Learning is an eclectic collection of poems from the unique perspective of a poet who has spent much of his life at the hard edge of education.

These poems reflect the emotions and experience of being a teacher as well as the thoughts and feelings about everything that externally impinges on teaching English. While the collection will have broad appeal to fellow practitioners, it will also resonate with anyone and everyone who has attended school.

Mike Ferguson’s poems about teaching and examining were written over a 30 year period as an English teacher, and over 35 years as an examiner of English Literature at GCSE level. The eclecticism comes not only from reflecting over a long period of time but, more pertinently, on a varying focus of style and the experiences themselves.

Ferguson’s most recent writing is almost exclusively ‘experimental’ in vein. A small core of poems are sonnets. A number of poems air the poet’s political and critical views on education.

“I have known Mike Ferguson as a friend and colleague for years, and have admired the clarity and integrity of his thinking about education in general and English education in particular. His occasional blog rants and regular ‘Christmas Stocking Filler’ pamphlets have been a welcome blast against fatuous and bigoted views of education, small bright beacons in an increasingly bleak landscape of politicised interference in the potential magic of English in the classroom. Those beacons draw their energy from a lifetime’s immersion in the craft of English teaching, and in experience as an examiner in various versions of GCSE over the years. Mike has put together here a collection that celebrates and scathes, with honours and horrors put on the page in poems, prose poems and monologues.” – Peter Thomas, former Chair of the National Association for the Teaching of English.

“Mike Ferguson’s latest collection takes us to the heart of his passion for two things: poetry and education.  In this wide-ranging anthology, it’s the wit and wisdom born of 30 plus years of teaching English and writing creatively that shines through. Sometimes there’s anger: Who Killed the Thought Fox rails against those who only value things they can run their “measuring tapes” across, ignoring all the other things teachers do for our children.  Often there’s humour: in a series of vignettes of teacher specialisms, we encounter, among others, science teachers who “think Physics is Maths with oomph” and PE teachers who “think poetry could use an exercise plan.” Ferguson’s is an original voice, expressed in various forms, from sonnets through free verse to prose poems.  He pays homage to some of the ‘greats’ – Ben Jonson, Poe, Coleridge, Hughes and Larkin. My personal favourite is the final list poem, Students, which could only be written by someone who had willingly devoted a working life to helping young people learn.” – Martin Phillips, former Local Authority English Adviser.

Drawing On Previous Learning can be purchased from Wrecking Ball Music & Books, Hull and from this website at https://wreckingballstore.co.uk/product/drawing-on-previous-learning/