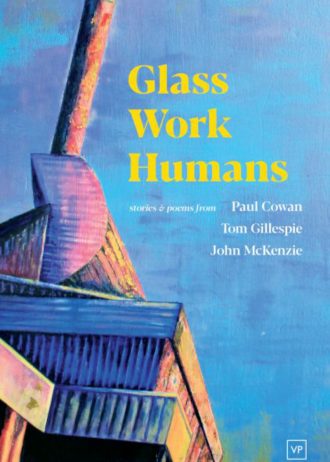 Glass Work Humans is a bold, unflinching collection of short stories and poems offering an honest and, at times, darkly humorous glimpse into the fragile and precarious lives of ordinary men and women in 21st-century Scotland. From the steelworker penning a suicide note in his lunch hour to the lonely divorcee finding comfort in a swarm of bees, the war-weary ex-copper toasting lost lives and the battle-scarred son dealing with his violent past, these are all people on the brink but not quite ready to break – seeking hope, salvation and solace in the smallest of everyday miracles.

Tom Gillespie is a Scottish-born novel and short story writer, now living in exile in Bath, England. His stories have been published worldwide in journals, e-zines and creative anthologies. His latest novel, The Strange Book of Jacob Boyce (Vine Leaves Press), has been praised by critics as ‘brilliantly unsettling’ and ‘obsessively compelling’. Tom is a graduate of Glasgow University and works as an English lecturer.

Paul Cowan grew up in Falkirk in central Scotland. After leaving school, he trained as a welder, which took him up and down the country and abroad. He even dipped his toes in the North Sea and worked offshore. He has been honing his skill as a writer, using his own life experiences as his guide, for nearly twenty years. His short stories and poems have appeared in numerous magazines and anthologies. Paul can still be found in Falkirk and has a five-year-old daughter.

John McKenzie grew up in Menstrie, a small village in Scotland. He worked in the financial sector until returning to education in his mid-thirties. Six years and one undergraduate degree course later, John is about to complete his Master of Letters in Creative Writing from the University of Stirling. He is also working on his first novel.