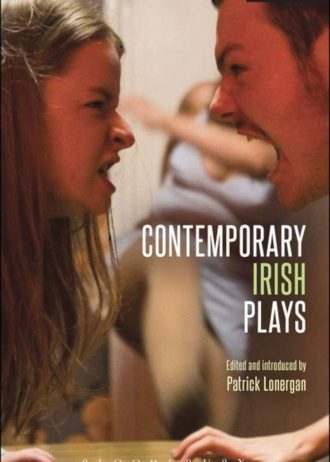 Contemporary Irish Plays showcases the new drama that has emerged since 2008. Featuring a blend of established and emerging writers, the anthology shows how Irish writers are embracing new methods of theatre-making to explore exciting new themes – while also finding new ways to come to terms with the legacies of the Troubles and the Celtic Tiger.

Drum Belly is a fascinating play about the Irish mafia in late 1960s’ New York. It premiered at the Abbey Theatre in 2012.

Previously unpublished, Planet Belfast by Rosemary Jenkinson is about a woman named Alice – Stormont’s only Green MLA who must toe a delicate line between large, sectarian power bases in order to promote an environmental agenda in Northern Ireland.

Forgotten features the interconnecting stories of four elderly people living in retirement homes and care facilities around Ireland, who range in age from 80 to 100 years old.

Desolate Heaven is a story about two young girls hoping to find freedom from home in the trappings of love. It was first performed at Theatre 503, London, in 2013.

Written for the 2012 Dublin Theatre Festival, and previously unpublished, The Boys of Foley Street by Louise Lowe is a piece of site-specific theatre which led audience members on a tour of the backstreets of inner-city Dublin.

Freefall is a sharp, humorous and exhilarating look at the fragility of a human life, blending impressionistic beauty, poignancy and comedy.

Edited by the leading scholar on Irish theatre, Patrick Lonergan, Contemporary Irish Plays is a timely reminder of the long-held tradition and strength of Irish theatre which blossoms even in its new-found circumstances.