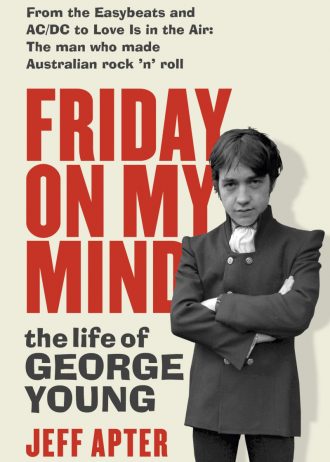 Friday on my Mind

George Young wasn’t so much on the charts for the best part of three decades: he and his musical partner Harry Vanda were the charts.

George’s journey began with the trailblazing Easybeats and continued, alongside Harry, as producer/songwriter for hire with John Paul Young, The Angels, Rose Tattoo, Cheetah, Ted Mulry, Stevie Wright and, most crucially, AC/DC. George and Harry also struck gold with Flash and the Pan, almost by accident.

In this long-overdue book, the first to focus exclusively on the life and work of George Young, writer Jeff Apter explores George’s long and fruitful association with Harry; his rare ability to maintain a stable married life with his wife Sandra; and his handshake deal with Ted Albert that helped create a music empire. The book also reveals such little-known events as the accident that almost killed off ‘Hey, St. Peter’ before its release, and the tragedy that bonded George and Harry for life.