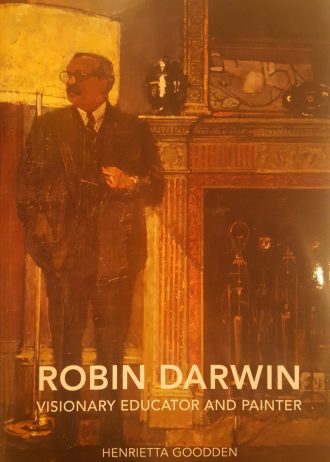 Sir Robert Vere (‘Robin’) Darwin, great-grandson of Charles Darwin, was a British artist of note and the highly influential Rector of the Royal College of Art from 1948 until 1971. His story, beginning in 1910, takes in life as an art student and then a teacher, his wartime involvement in camouflage, British postwar reconstruction and the Festival of Britain 1951. His influence in shaping British arts education for the future is uncontested (the list of RCA graduates from 1950-1980 is particularly impressive, including not only fine artists (David Hockney, Peter Blake) but also leaders in industrial design such as James Dyson.

The current status of the Royal College of Art is largely the result of one man, a formidable force with the drive, vision and ability to inspire huge loyalty and first-class creative thinking in others. The list of RCA professors, tutors and visiting lecturers recruited by Darwin reads like a rollcall of the best in post-war British design and art, and their influence continues to inspire students to this day.