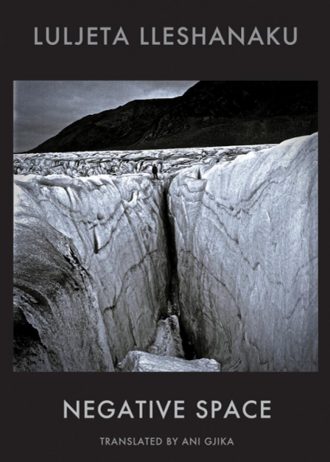 Albania’s Luljeta Lleshanaku grew up in negative space, living under family house arrest during the years of Enver Hoxha’s autocratic communist rule. Her recent poems are a response to what was missing then, not only in her life but for her whole generation, evoking absences, emptiness what was unseen, unspoken or undone through the concept of negative space. The space around objects, not the objects themselves, becomes the real, most significant part of an image, bringing balance to the whole of a composition, so enabling Lleshanaku to look back at the reality of her Albanian past and give voice to those who could not speak for themselves. Many of the poems are tied to no specific place or time. Histories intertwine and stories are re-framed, as in her long poem ‘Homo Antarcticus’, which traces the fate of an inspirational explorer who could adapt to months of near-starvation in sub-zero Antarctica but not to later life back in civilisation, one of a number of poems in the book relating to society’s pressure on the individual. Sorrow and death, love and desire, imprisonment and disappointment are all themes that echo deeply in Lleshanaku’s hauntingly beautiful poems. Translated by Ani Gjika, Negative Space draws on two recent collections published in Albania, Almost Yesterday (2012) and Homo Antarcticus (2015). Ani Gjika’s translation from the Albanian is on the Griffin Poetry Prize 2019 International shortlist. Negative Space follows Haywire: New & Selected Poems, Luljeta Lleshanaku’s first UK selection published by Bloodaxe in 2011, a Poetry Book Society Recommended Translation which was shortlisted for the Corneliu M. Popescu Prize in 2013.